» Back to Blog Posts

AcuityMD's deep dive into the recently released 2020 Sunshine Act data. Read about how COVID changed the game for all the players involved: medical device and pharmaceutical companies, doctors, and teaching hospitals.

Intro: what is the Sunshine Act?

The Physician Payments Sunshine Act, which passed in 2010, is a law that seeks to improve transparency in the medical industry by requiring medical device, pharmaceutical, and biological manufacturers to disclose payments (or any other “transfers of value”) they make to health care providers. The Open Payments database went live in 2014 and has added data annually since then. As the leading provider of software and data for the medtech industry, AcuityMD is interested in how manufacturers interact with and influence Health Care Professionals (HCPs)—and how the COVID pandemic upended extant trends and patterns.

The pandemic caused a sharp drop in Industry Payments

In 2019, before the COVID-19 pandemic led to widespread disruptions in travel and large gatherings, payments to HCPs reached $3.56 billion. 613,924 HCPs received an average of $5,804 in meals, travel, gifts, speaking fees, research grants, and so on.

Royalty and license payments also fell by a considerable margin, from $1.58 billion in 2019 to $834 million in 2020 (a 47% decrease), perhaps due to lower product usage given cancellations of elective procedures. Consulting fees dropped to a lesser degree: from $456 million to $376 million (18% decrease), indicating that many medical device and biopharma suppliers were able to shift to educate HCPs via remote speaking events or webinars. 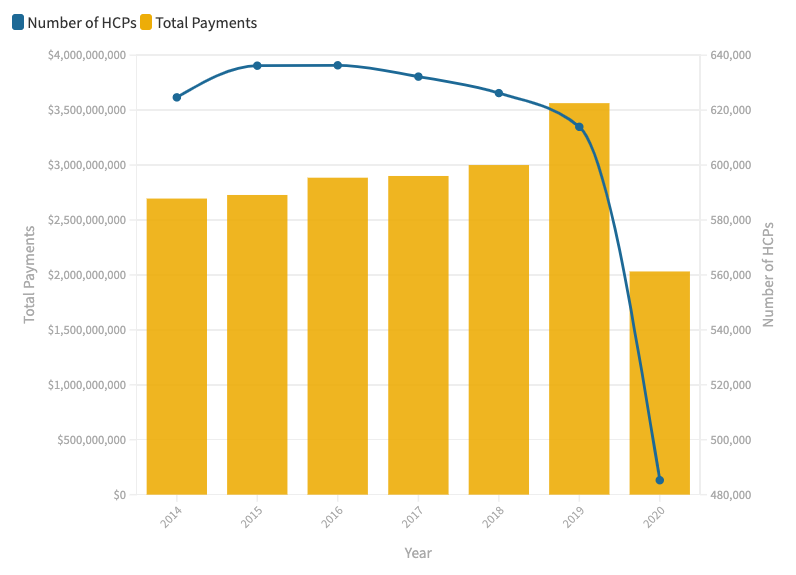 Payments to teaching hospitals dropped 62% in one year

Apart from HCPs, other recipients of Sunshine Act payments are Teaching Hospitals. Companies have to report any grants, charitable contributions, space rental fees, and other transfers of value that they give to hospitals that run graduate medical education programs.

The rapid decline in payments to teaching hospitals came amid already difficult financial conditions for hospitals, many of which lost money over the course of the pandemic due to delayed or canceled elective procedures.

The following chart shows which teaching hospitals received the most from the highest-spending medical device and pharmaceutical companies in 2019. One takeaway from this image is the degree to which companies focus their financial relationships on a single teaching hospital. For example, Genetech spent over $400 million in payments to teaching hospitals in 2019, of which $379 million—the vast majority—went to the City of Hope National Medical Center in California. 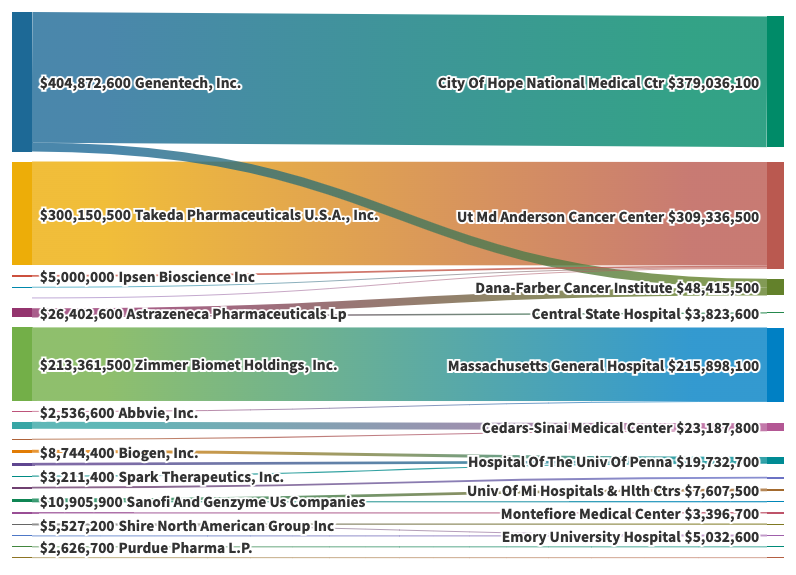 Most companies spent less on doctors in 2020, but some took another path

Total payments declined at most companies from 2019 to 2020. The chart below shows how total payments from the top ten highest-spending companies (based on 2019 numbers) changed from 2019 to 2020. Six of the top ten spenders in 2019 were from the medical device sector: Zimmer Biomet, DePuy Synthes, Stryker, Boston Scientific, Medtronic, and Arthrex. 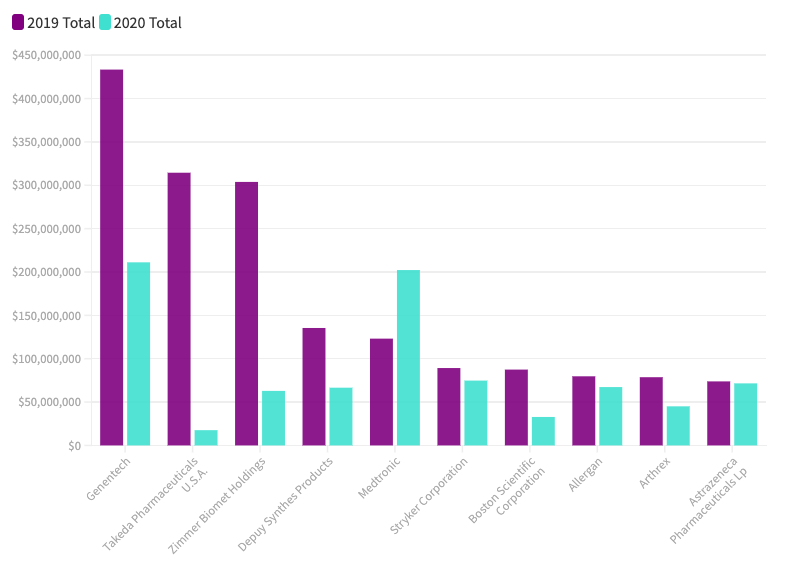 Medtronic was by far the largest company that reported spending more in payments in 2020 than 2019. The company drastically increased its spending under its Vascular and Minimed (diabetic care) divisions, which both report their Open Payments data separately from the rest of the company. While Medtronic reported spending less in 2020 on its general medical devices, Vascular increased spending from $38.3 million to $93.8 million. Minimed payments soared from just $1.6 million to $40.9 million.

A few larger companies also bucked the trend like Medtronic and increased spending in 2020. These increases were likely driven by M&A activity and new product launches. Apart from Medtronic, the companies that had the largest increases from 2019 (among those that spent more than $5 million in 2020) were:

The medtech and biopharma industry’s commercial status quo ante covid was profoundly disrupted in 2020. With a dearth of in-person meals, conferences, and seminars, HCPs and hospitals alike received far less in payments from medical device and pharmaceutical companies in 2020 than in prior years. Though 2021 Open Payments data will not be available for some months, the havoc wreaked by the Delta and Omicron waves likely produced a similar effect last year.

What remains unknown is how the industry will act once society has largely moved on from pandemic cautions and restrictions. Will payments return to “normal?” The answer is probably yes. Perhaps, though, the impacts of COVID will have a longer-lasting effect and offer a chance to reimagine the byzantine financial network of industry payments. Either way, AcuityMD will stay focused on helping our clients bring their products to market and expanding patient access to cutting-edge medical technologies.

See how AcuityMD can change the way you build customer relationships